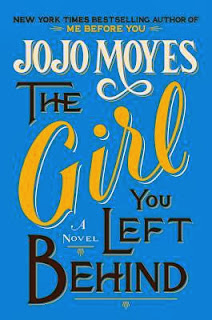 The Girl You Left Behind by Jojo Moyes

A true story made headlines November 4, 2013.  A trove of approximately 1500 works of art confiscated by the Nazis in WWII were seized in a Munich apartment. The value was estimated to be $1.3 billion by artists such as Picasso, Matisse and Chagall.  The news goes on to say that determining the rightful owners of the works decades after they were either sold under duress or seized could take years.

One might think this would be a great premise for a novel and The Girl You Left Behind might just be that novel.  Published earlier this year, it was obviously written before this news broke.  The work of art at the heart of this story is of course fictional as are the events surrounding it.  The painting entitled “The Girl You Left Behind”, was painted in the year 1915 by a French artist, Eduardo Leferve and it resurfaces in the year 2001 in London.

There are actually two girls left behind in this story.  The first is Sophie Lefevre whose artist husband Eduardo goes to war for France in 1916.  The second is Liv a young widow in London whose husband dies prematurely in 2000.  Their stories, some eighty years apart, are connected through a painting  of “the girl” who is actually Sophie painted by her husband.  The painting resurfaces in the story in Liv’s bedroom. It was a gift from her husband on their honeymoon.  The two girls are united by a passion for this painting which represents both their husband’s love and devotion to them.

The dual timeframe storyline almost a century apart flows effortlessly from one to the other, although Sophie’s historical storyline is, I believe, the stronger of the two.  Sophie, struggling to keep the family’s hotel afloat under the German occupation of France, hangs her portrait in the hotel where it is a daily reminder of the proud self-reliant girl her husband saw.  She wants this reminder as the German invasion causes her to feel that the “glowing girl willful in her confidence” is slipping away due to enemy oppression and poor nutrition.  Although the opening scene would have readers doubt this when she confronts the German Kommandant’s accusation that she is harboring livestock.  It is my favorite scene in the book.

The risk she takes in hanging the portrait in a public place is that it is also visible to all.  When the German Kommandant notices the painting, his comments reveal that he is a cultured man..  The portrait is the catalyst that  causes Sophie to risk everything—reputation, family and her life—in hopes of seeing her Eduardo again.
What follows is a wary connection made between the Kommandant and Sophie that leads to tragic circumstances

Ninety years later the portrait hangs in Liv’s bedroom, as a cherished memento of her husband and their honeymoon.   On the one-year anniversary of her husband’s death, Livy meets Paul and his friendship is the first stirring of feeling she’s had for anyone since the death of her husband.  Unfortunately, Paul works for a company specializing in the return of artworks looted during wartime.  I think you can see where this is headed.  Instead of a blossoming relationship, they are now on opposing sides. The tension mounts as the case of rightful ownership goes to court.  Documents produced at the trial take us back in time to Sophie’s ordeal and  we discover, as Paul Harvey would say, “the rest of the story”.  Was the portrait stolen from the Lefevre family or was it gifted?

Liv, like Sophie, takes a great risk as she defends her right to keep the portrait as she becomes subject to unthinking public hostility. Although the painting disappeared during WWI, she gets hate mail urging her to end the suffering of the Jewish people. Return what is rightly theirs. Both heroines are united in their determination to fight for the thing they love most....whatever the cost.

As one review, which I totally agree with, says,  “JoJo Moyes does a majestic job of conjuring a cast of characters who are charismatic, credible and utterly compelling.”

This is the second book I’ve read by this author this past year and the other one, Me Before You was also mesmerizing.  Moyes finds a way to place her characters in extremely difficult situations where the stakes are high no matter what decision they make.  Me Before You is the story of a young caretaker who falls in love with her patient—a young, handsome, formerly virile man now a paralyzed from an accident.  A full box of tissues read.

JoJo Moyes, who lives in London, is a former journalist turned novelist. Her novel Foreign Fruit won the Romantic Novelists’ Association Novel of the Year Award in 2004.