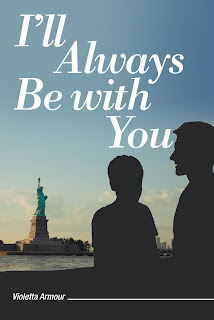 Violetta Armour has written a gem of a story that has heart, soul and empathetic insights and is potent in its small moments. The well-drawn characters are true-to-life in representing the pain and confusion felt when tragedy strikes. Historical details from warring Bulgaria that caused many to flee, as well as racial tensions during the late 1960s, are cleanly woven into the narrative, giving the story purposeful dimension. A final nice touch is the addition of old-country recipes from the author's own "Baba."
All in all, this beautifully crafted, touching book offers tender wisdom that will draw a wide audience and could be especially appealing to young adults grappling with insecurities and difficult times.

The untimely death of a father leads to major life changes and startling discoveries for the man's teenage son and his wife in this emotionally rich, introspective novel about grief and recovery set just before the turn of the 21st century.
The book opens with a bang, beginning with this startling statement: "I never meant to kill my dad." Building steadily from there, the story unfolds initially from the point of view of young, remorseful Teddy. He was eagerly learning to drive in Phoenix with his dad, Stan, when the car was broadsided by a drunk driver. Teddy's grieving mother, Mary, is also deeply impacted and decides the best thing for the family would be to move to Stan's small hometown of Middleburg, Indiana, and live with his Bulgarian mother.

Teddy struggles to fit in at school, but finds comfort from a book his great-grandfather brought to America from the old country. He also receives unexpected guidance from an impish and brainy girl; a severely burned teen with wise insights, and a perceptive graveyard caretaker. Meanwhile, Mary seeks support from Stan’s high school sweetheart, an understanding black woman named Rosetta, and is shocked to find Rosetta had much more than a casual relationship with Stan.