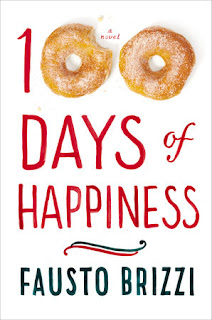 100 Days Of Happiness by Fausto Brizzi

It’s December. The month of good cheer and joy.  So why would I choose to review a book that deals with terminal cancer and a diagnosis of 100 days to live for the main fictional character, Lucio Battistini?  Because although it is a sad subject, the book is by no means tragic. In fact, it is filled with hope, humor and a reminder that “to live life to the full” is to appreciate thoroughly what you already have.

A best seller in the author’s native Italy, this is Fausto Brizzi’s first novel, deftly translated by Antony Shugar.  Brizzi, an Italian director, screen-writer and film producer,  structures the novel in a very readable format, counting down the days from 100, documenting Lucio’s three-month journey, or better called his “adventure”, to achieve his goals of enjoying the smallest pleasures in life, spending time with those he loves. His search for happiness lies not in unfulfilled dreams and ambitions but in appreciating the things in life that he has taken for granted.

But he also sets himself the hardest task of all—to earn his wife’s forgiveness.

Told in first person, we meet Lucio, who at the opening of the book is sleeping on a camp bed in the back room of his father-in-law’s bakery. Why?  Because his wife, Paola, has thrown him out of their home when she discovers he has had an affair with one of his clients at the gym where he is a trainer.  In spite of this discretion, we find ourselves sympathizing with this flawed character because realizing the error of his ways, he is well aware that he has been “a complete moron” with this one aberration in what has otherwise been a happy marriage.  He spends the next 100 days seeking his wife’s forgiveness, trying to win her love back and to repair what he calls his “shipwreck” of their marriage.  Paola, not angry or bitter, remains distant and unforgiving, in spite of Lucio’s diagnosis. We find ourselves hoping she will relent and forgive Lucio.  The tension mounts as the day count goes down.

Lucio also makes every effort to maximize his time with others dearest to him-his two children, ages six and nine and his life-long friends Umberto and Corrado.  These colorful characters are developed with such affection, warmth and humor you find yourself smiling or laughing each time they enter a scene in Lucio’s heartfelt journey. There is also another constant companion he has come to accept who he has named my friend Fritz.  Yes, he has named his tumor after an Italian phrase to “describe hypothetical friends you don’t want to name outright”.

As one reviewer said, “There is so much to love about this novel.”  It is filled with vivid descriptions of Rome, references to great works of literature and poetry, and occasional facts about the many inventions of Leonardo Da Vinci.

Some readers might find fault with the premise of the story saying it is not realistic--Lucio’s acceptance of his fate, refusing treatment and setting off on a grand adventure.. Others, myself included, are willing to suspend their disbelief for the sake of a heart-warming story.

This book has been compared to Beckman’s A Man Called Ove, the Swedish novel that swept across Europe last year. Ove finds solace and purpose in community spirit and neighborly good deeds after his dear wife’s death.  Both books offer us an alternative to the cynicism and violence our attention is so often drawn to in the world around us.

As for me, a simple, feel-good narrative with plenty of gentle humor is exactly what December and a Christmas story should give us.  Oh, one note of caution. You might find yourself craving a delicious donut by the end of the book.  Read on and enjoy this delectable tale.

Posted by Violetta at 6:58 PM No comments: