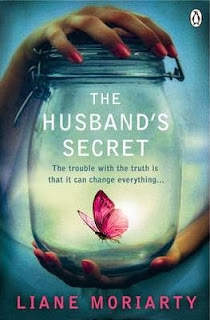 The Husband’s Secret by Liane Moriarty has been billed as a great beach read or one you want to curl up with for the whole day beside a cozy fireplace.  Since we have no beach in Phoenix, it’s too early for a cozy fire, and even poolside season is over, what’s one to do?

My suggestion is read it anyway, but don’t start it if you have a LOT of things to do because I don’t think you’ll want to put this book down.  Perhaps an exaggeration on my part, but the author does keep the action and suspense moving from page one until the very last page.  It centers on the lives of three women—Cecilia, the driven and successful Tupperware specialist and mother of three; Tess, a career woman and mother whose husband falls in love with her cousin; Rachel, a widow and school secretary in her 70’s who is still grieving the premature death of her daughter twenty years ago and is now in a panic because her only grandson, who she adores, is moving to New York. (The story takes place in Sydney, Australia).

Although this description makes it sound like  “chick lit”, trust me-- there is enough suspense, mystery and male perspective to keep the male audience riveted too.

On a side note, because I read this as an “audio” book, I must say the narrator was a wonderful actor who was able to portray all the voices brilliantly in beautiful Australian accents, from the 2- year old grandson to the 70-year old and everyone in-between.  And there are a lot of in-betweens who captivated me as well as the three main characters—Rachel’s son and daughter-in-law; Cecilia’s husband, John-Paul; and Tess’ husband Will and cousin, Felicity.  Within a seven-day period, culminating on Easter Sunday, the lives of these eight people will interact in a way none of them could ever have imagined.  In fact, it seems to me that they are all main characters because they reveal so much of their thoughts as the plot moves forward.

At the heart of the story is a letter that is not meant to be read.  Cecelia stumbles upon a faded, yellowed, sealed envelope from her husband that reads,  “To be opened upon my death,” but her husband, John-Paul is very much alive.  John-Paul is out of town when she finds the letter. She does not open it and discusses the finding of it in a phone conversation with him.  He begs her not to open and Cecelia agrees to honor his wish. But when he returns home, his suspicious actions cause her to renege on her promise.  And thus, Pandora’s box is opened.

The story is told from the three women’s perspectives during the seven-day period, but includes many flashbacks which explain their motivations and make them credible and sympathetic.  Their brutally honest thought processes as they deal with their particular circumstances also make this multi-layered story rich and very relatable.

Cecilia, Tess and Rachel are three very good women.  They have lived blameless lives until two husbands’ secrets are revealed.  Then they have to re-asses their relationships with those closest to them

There are many themes to explore:  grief, love, guilt, fate, obligation to one’s loved ones and society as a whole.  I believe it is no accident that the story culminates on Easter Sunday, a day of resurrection and redemption because none of these characters can go back and undo the damage, but must now decide how to forgive and move forward in their lives with courage and hope.

Neurotic insecurity is also another issue explored as it affects the decisions these characters have made in their lives. I think causes the reader to examine how their own insecurities may have altered the paths of their life.  This would be a great book discussion choice for all the above reasons.  There is so much depth yet the fast pace of it leaves one not time to dwell or ponder on these issues—we have to keep reading to see how it all turns out for these people.  Only when we are finished with the story can we appreciate how much there is to discuss—including ethics and morals—what happens when we find that we are capable of doing something which seems entirely out of character?

And one final theme to emerge is exploration of the   “What  could have been?”  The epilogue tells us what might have been for these characters, but also cautions us,  “Perhaps some secrets are meant to stay secret forever.  Just ask Pandora.”

Author Liane Moriarty has written four previous novels for adults as well as a series of books for children.  Born in Sydney, Australia, she earned a Masters degree at Macquire University in Sydney.  She was sitting in a suburban café with her toddler when she got the news every author wants to hear:  Husband’s Secret had just raced to the top of the NY Times bestseller list shortly after its release.  Movie rights for the book have been snapped up by CBS Films.

Posted by Violetta at 4:53 PM No comments: 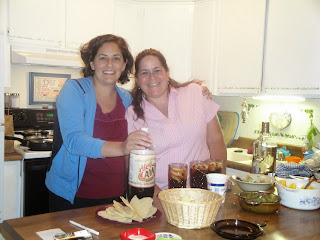 Who doesn’t love a surprise?  Well, I participated in many this weekend.  Both as a surpriser and to my surprise—a surprisee!

It was our daughter LeAnna’s 50th birthday.  LeAnna is my husband’s youngest child and she was 22 when I married her Dad.   My daugher, Roberta, was 16.  LeAnna took her under her wing and they became friends as well as sisters. (I don’t know if LeAnna enjoyed acting 16 again or Berta enjoyed acting like she was over 21). Their adventures are another whole blog so I won’t digress.

When LeAnna was approaching her 50th birthday on Sept. 20 of this year her sister-in-law Brenda planned a surprise party for Friday, the day of her birthday.  My daughter Berta could not come from California that day to surprise her sister—yes, they consider themselves REAL sisters— heartwarming to say the least to Don and I....once again I digress.

So..Berta and Maribelle flew in secretly on Wednesday.  Berta made arrangements with LeAnna’s boss at UOPhx to have LeAnna NOT show up for work that day.  The plan was for Berta to be in LeAnna’s bedroom when she awoke on Thursday and whisk her off to a spa for the day.  My treat was getting a day with Maribelle, (age 4 ½..going on 13.). Another digression I wil spare you at this time.

As it turned out, we drove to LeAnna’s house at 7:30 am when she normally takes Emma to school (3rd grade. ) We drove past her house and parked on the other side of the street....the stake-out.  As Berta said, we needed Styrofoam cups of coffee in hand like the real cops do it.  When she came out of her house, I yelled “Duck”. Even   tho she wasn’t even looking our way...she probably heard us with my big mouth.  But she didn’t see or hear us.

When LeAnna and Emma drove out of their driveway, we followed them to the school parking lot, trying to keep our distance yet not let her car out of our sight—what we didn’t count on were so many other parents driving the same route and keeping us from a close follow at the turn.

When LeAnna walked Emma into the school, we crouched behind the grill of her car and watched for her return. As she approached her car, we started singing” Happy Birthday” and jumped up.  She was SOOOOO surprised.  We thought we better sing a happy song....otherwise she might think something terrible had happened to someone in the family.  She kept saying, “I need to go to work” and we said, “no you don’t”....but unknown to us or her immediate supervisor who we made the arrangements with, LeAnna had a meeting with her bosses’ boss...the BIG boss..  A phone call took care of that.  Being the “good famiy man” he was, he was totally cool with it and bought into the surprise gift.

So it WAS a great day...and then Friday night LeAnna had another surpise coming –the party at her brother and sister-in-laws.  She thought they were dropping Emma off there while she and Robert went to dinner.  But in fact it was a party including a surprise visit from her mother and aunt from Colorado...and her niece Courtney from Seattle.  This was a total surprise....to US too.  We were told she could not find a work replacement (just started a new job there in Sept.)

They had placed a big gift wrapped box in the living room which could be seen from the front door...and when LeAnna came in, Courtney popped out of the box like a jack –in-the-box.   A wonderful amazing moment.

And speaking of amazing, LeAnna truly is.  She’s a wonderful mom, wife, daughter, sister, and aunt.  She juggles a full-time stressful job with her family responsibilities and is always there for whoever needs her.  To my continual joy, she calls me “bonus mom”.

But when it comes to daughters, I think I got the BONUS. A double bonus with two dear girls. Happy Birthday  LeAnna and many many more in good health.  May you be showered with many more happy surprises.