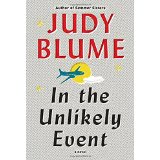 In The Unlikely Event by Judy Blume

Author Judy Blume has become a household name for anyone growing up in the 70’s and 80’s either as a child, teen, or the parent of one. She dared to write fiction with controversial issues of the day which caused her works to become either beloved, banned or both.   She dared to write of taboo topics of the day such as racism in Iggie’s House, bullying in Blubber and sex in Forever. Perhaps her most noted for teen girls coming of age is Are You There God? It’s Me Margaret.

Now at age 77, she has written her second adult novel, In The Unlikely Event, a fictional tale that takes place in the 50’s based on actual events that happened in her hometown of Elizabeth, New Jersey.   Using her own young life as source material, she recalls three actual and horrific plane crashes at the Newark airport that took place over eight weeks.  In an interview she said, “…that story lived so deep inside me. I’m glad it’s out. I’m glad the book is finished.  I never told anybody this story. Not even my daughter, who became a commercial airline pilot. When she read an early draft of this book, she said “Mother how could you never have told me this story.’”

The story begins in 1987 when the main character, Miri Ammerman, returns to her hometown of Elizabeth, New Jersey, to attend a commemoration of the worst year of her life, when the three plane crashes occurred.  Then the reader is transported back to Mimi’s life in the 50’s, where fifteen-year old Mimi  lives with her 33-year-old single mother, Rusty. She knows nothing of her abandoned father.  Other colorful characters are grandmother Irene, who sells cosmetics and best friend Natalie, the affluent dentist’s daughter.   Miri is experiencing her first love with Mason, an orphan with secrets of his own and she lives in constant fear that Rusty will not approve of him because he is not Jewish. Another forbidden love is the dentist’s secretary who has fallen for a boy who is not Greek as she is and the family will never approve. There is also a beloved uncle to Mimi, Henry, a reporter who lives with them and is a positive influence in Mimi’s life.

Then as the planes descend upon this community, devastation occurs both physically and emotionally for the people who live there. In a panic state, the people try to find a reason for the disasters in such close proximity.  Could it mean something that all three crashes narrowly missed schools?  Was it the work of Communists? (this was the 50’s) or even aliens or sabotage.  The site of the third crash almost takes on a carnival air, with hawkers selling popcorn and families taking their children to see the devastation.  As awful as the crashes were, Blume focuses on the way people themselves crash and burn, or often fly higher than expected.

The novel is told in short chapter bursts in many voices.  The characters are introduced quickly and at times can be a little confusing, but eventually you realize that all these lives are threaded together.  The details of the 50’s will be recognizable to many of you—post-WWII suburbs, refinished basements with knotty pine walls, Bird’s Eye vegetables, Elizabeth Taylor haircuts and the Korean war references.

The end takes us back to the reunion of the 80’s to show how eventually the people who lived through this experience managed to make sense of what they saw.  One character sums it up, “Terrible things can happen in this life, but being in love changes everything.”  Blume says, in her unique writing perspective,” We are all passengers in this world, fastening our seatbelts, hoping we reach our desired destinations and bracing for what comes next.”

Posted by Violetta at 9:39 PM No comments: