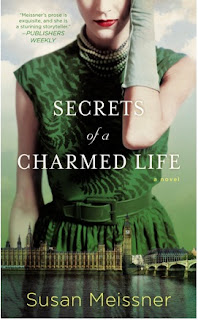 Posted by Violetta at 7:07 AM No comments:

Email ThisBlogThis!Share to TwitterShare to FacebookShare to Pinterest
Secrets  of a Charmed Life by Susan Meissner


This is the first book I have read by Susan Meissner. It will not be my last.

Susan writes historical novels that typically alternate a present-day story with one from a specific historical period or event.   As Secrets of a Charmed Life opens we meet Kendra Van Zant, a young American student at Oxford, England, who is on an assignment to interview an elderly renowned artist, Isabel McFarland. Isabel has refused interview requests for 70 years, but as her family gathers on the lawn to celebrate her 93rd birthday, she agrees to share with Kendra her first-hand experiences of the German bombings in London in 1940.   I will not reveal the magnet that draws you into the story early on, but trust me, when you read the last two lines of Chapter One, you will be compelled to continue.

The second reason to keep reading is a riveting plot.  In 1940 a half million (some sources say one million) children were evacuated from London to the surrounding countryside for “safe-keeping”. Many of you reading this are parents or grandparents. Imagine for one minute putting your young child on a bus or train that will take them to a remote location hours from the city.  Not knowing where or who they will come to live with or how long they will be gone.  The evacuations were not mandatory but highly encouraged by the government.  Parents were torn with protecting their child under their London roof, which most in most likelihood would be destroyed, or sending them off alone with hopes of surviving the travesty of the war and being re-united someday.

The third reason to keep reading are characters we come to love and sympathize with as they deal with these horrors and make choices that will have consequences for the rest of their lives.

In chapter two we meet 15-year old Emmy Downtree, an idealistic teen-ager, who makes a bad choice although her intentions were good.  Emmy and her 7 -year -old half sister, Julia, have been evacuated to the countryside. Emmy protests. She does not want to leave the city but she obeys her mother’s request to go for Julia’s sake –to make sure Julia is in good hands and also because  Julia adores Emmy.  In fact, Emmy has been the parent figure because their  single mother, is gone so much.  The fathers of both girls are absent in their lives.

Although Emmy and Julia are taken in by a wonderful nurturing lady, Charlotte, in an idyllic setting of a beautiful country home with climbing roses, clucking chickens, a shining pond and gabled windows, Emmy can’t let go of her dreams back in London where she had a job as a wedding dressmaker’s assistant.  Emmy’s greatest dream is to design, make and sell her own wedding gowns. She has a treasured box of sketches she drew that she values more than anything.

When the once- in- a -lifetime opportunity to meet with a famous designer in London to begin a mentorship presents itself, Emmy plans secretly to return to London, knowing Julia will remain safe with Charlotte.   However, her plan goes terribly wrong when Julia awakes and insists on going with her. Headstrong and ambitious, Emmy does not want to scrap her plan that holds a promising future. She allows Julia to go with her.  Their timing could not have been worse.  The date is September 7, 1940, the first night of the “blitzkrieg” (lightning war) when 300 German bombers raided London, in the first of 57 consecutive nights of bombing.

The sisters become separated and Emmy’s story is one of searching-- searching for Julia, searching for forgiveness, and searching for a way to live with regret.  “…when you make a choice, even if it is a bad one, you’ve played your hand. You cannot live your life as though you still held all your cards.”

Several times throughout the story and at the end, we return to the present day interview with Kendra and Isabel. Emmy’s story is told in a past-tense perspective and Kendra’s in present tense.  This structure allows the reader to easily switch from present  day to the past.

The Q & A with the author at the end of the book is also interesting and informative.

An interesting side note about children’s literature that came out of this tragic time in London history.

Michael Bond’s Paddington Bear is about an orphan bear found by a family in Paddington Railway Station in London, sitting on his suitcase with a note attached to his coat that reads, “Please look after this bear. Thank you.”  Bond said that his memories of newsreels  showing trainloads of child evacuees leaving London during WWII with labels around their necks and their possessions in a small suitcase, prompted him to do the same for Paddington.

In  the movie, Bedknobs and Broomsticks,  based on two novels by Mary Norton, the evacuee children are taken in by a good witch-in-training.

In C.S. Lewis’ novel, The Lion, the Witch and the Wardrobe, the children are evacuated from London to the stately manor that contains the portal to Narnia.

On the adult level, If you liked Orphan Train by Kline and The Secret Keeper by Morton, you will like this story that combines history with the emotional stories of the people who lived through horrific times, managed their fears and held on to hope through it all.

Posted by Violetta at 7:06 AM No comments: