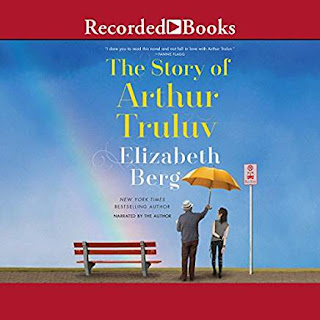 I fell in love with author Elizabeth Berg’s writing back in the early 90’s with her first book, Talk Before Sleep. Since then I count 23 novels in 23 years and she rarely disappoints. Her trademark is the ability to make everyday and ordinary people characters you want to spend time with, meet for lunch, and so often, people you hate to say good-bye to on the last page.  Having heard her speak on two occasions at bookstores in Phoenix, I felt the same about her as she displayed the warmth and compassion evident in so many of her characters as they deal with difficult situations in their life.  A former nurse, many of her stories deal with sickness and death, subjects she seems very familiar with. In spite of the topics, her books are always uplifting.   As author Fannie Flagg says about Berg’s latest book, Arthur Truluv, “I dare you to read this novel and not fall in love with Arthur…he will make you laugh and cry…and what it means to be human.”

Arthur Moses, at age 85 goes to the cemetery every day to eat his lunch at his late wife Nola’s grave. At night he scrounges up whatever canned goods he can find in his pantry, tries to prevent his cat, Gordon, from running away and dodges the busy-body next door, Lucille, who keeps trying to entice him to her front porch with her delicious baked goods.

One day at the cemetery Arthur meets a troubled teen-aged girl, Maddy, who often cuts classes at her near-by school where classmates torment her and make her the butt of their tasteless jokes.   An unlikely friendship forms between this grieving senior citizen and the girl with a nose ring. She dubs him Arthur Truluv for the devotion he displays to his wife each day and for his loving and positive responses to every outrageous thing she says or does.  Mandy, whose mother died when she was a baby, has been raised by a well-meaning but distant father so she seeks love in all the wrong places—like a handsome Wal-Mart employee who of course turns out to be a cad.

A few sub-plots are interesting also:  Lucille’s rekindled romance with a former high-school sweetheart and Arthur’s walks through the cemetery and his uncanny ability to sense what a person’s life was like as he reads their name on their tombstone.

Not to be a plot spoiler, I will just say that these 3 characters—Arthur, Mandy and Lucille come together in a way that renews the human spirit and shows how small acts of kindness turn friends into family.

Although Arthur Truluv is the antithesis of recent literature’s grumpy golden agers, like Olive Kitteridge and A Man Called Ove, there are many similarities by the end of the book.

Posted by Violetta at 5:09 PM No comments: 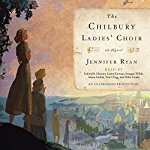 Book Review of The Chilbury Ladies’ Choir
by Jennifer Ryan

“Just because the men have gone to war, why do we have to close the choir? And precisely when we need it the most.”

So says Primrose Trent, the spirted music professor in the village of Chilbury (Kent, England, 1940). She emboldens the women of the town to defy the Vicar’s stuffy edict to close the choir in the absence of men and instead “carry on singing”.  Resurrecting themselves as the Chilbury Ladies’ Choir, the women of this small village soon use their joint song to lift themselves up as the war tears through the lives of this sleepy community.

With the village sons, brothers, husbands and lovers heading off to join the war effort, Chilbury is virtually absent of men. The novel is told in a series of letters and journal entries of the women left behind, an eclectic cast of character, all members of the choir. It includes a lonely and shy widow as she fears for the safety of her only son and is tapped to take a colonel into her home; the town beauty drawn to a rakish artist, her younger sister nursing an impossible crush and dabbling in politics she doesn’t understand; a young Jewish refugee hiding secrets about her family and a conniving midwife plotting to outrun her seedy past when she is bribed to exchange a girl baby for a boy baby.  Yes, there is much drama as author Jennifer Ryan captures the experience of the war from a woman’s perspective.  So much so that the television rights to this splendid novel have already been optioned by Carnival TV—the production company behind Downton Abbey.

Ryan, a native of England and former book editor, now lives in the Washington D.C. area. When asked about the women who inspired her story, she says she drew inspiration from her grandmother, who was a pretty, plump and jolly 20-year old at the beginning of World War II in England. Her life changed irrevocably as a result of the war as it did for many young women of the time, creating far more excitement than there had ever been before the war. “There was a general feeling that every day could be their last, making people drop their morals and enjoy life to the very fullest.”

Her grandmother too belonged to a choir that was women only (by default) as the men had left for war. Unlike the Chilbury ladies, it was a notoriously bad choir and they sang off-key for the entire war.  Ryan said the best part of her research was interviewing old ladies about their memories of the war.  In spite of horrific and sad stories of people losing loved ones, shockingly,
“most of them told me that the war was the best time of their lives because of the camaraderie developed amongst women as they took on many challenges and developed confidence and new skills in the workplace.”  Ryan says, “I wanted to write a novel in the women’s own voices, both in journals and letters, so that the reader could really get into their minds…to be fully immersed in the era and characters.”

I believe she succeeded as I was fully engaged throughout the book.  If you are an audio book fan, you will have the added pleasure of hearing the beautiful harmonic voices of this choir. Very uplifting.

Posted by Violetta at 5:52 PM No comments: