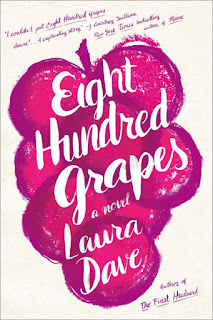 “You don’t give up on a family. Not without trying to put it back together.”  This is what Georgia Ford’s brother says to her. “My brother who always said the wrong thing, said the most important thing of all.” This conversation comes late in the story after we have spent a week with the Ford family as seen through the eyes of Georgia in her first person account.

It’s not an ordinary week. It’s harvest week at her father’s vineyard in beautiful Sonoma in northern California. It’s also the week leading up to Georgia’s wedding to a successful British business man she met in Los Angeles where she practices law.

Within the first few pages however, Georgia, makes a startling discovery that her fiancée is not the person she thought he was.  In a desperate panic she drives alone all night, 400 miles to her parents’ home and vineyard where the wedding is to be held.  But there she uncovers a few other disturbing events.  Instead of finding solace and understanding in the home she always loved, upon her arrival in the middle of the night, her world is turned upside down one more time.  And yet another time.  It appears that everyone in the family has been harboring their own secrets and it is in this unnerving climate that she must make life-changing decisions.

It’s difficult to discuss the events of the week without being plot spoilers so I will focus instead on some of the other interesting aspects of the story.

The word synchronization is a repeated refrain throughout the story and if you were giving a book report saying it was one of the themes of the book, you would probably get an A+.   Georgia’s father, a key figure in the story,  defines it as “the coordination of events to operate in unison.  A conductor managing to keep his orchestra in tune.  The impossible meeting  of light reflection and time exposure that leads to a perfect photograph. Not fate”, Georgia’s father would add. “Don’t confuse it with fate. Fate suggests no agency. Synchronization is all about agency. It involves all systems running in a state where different parts of the system are almost, if not precisely ready”.   When seen in a negative light, many people would call this the “perfect storm”.  And  a perfect storm is brewing during harvest week leading up the wedding date.

Synchonization is also what leads to a perfect bottle of wine.  Georgia’s father is a biodynamic winemaker. “My father believed the most important aspect of winemaking was the soil. That his wine got better year after year because the soil did. He would monitor his soil carefully….no chemical, nothing added from outside the farm. This created a lot of work but it also created a more stable ecosystem. That’s what he was most proud of, that he had made the land stronger.”

There are some flashbacks where we learn how her parents met, their beautiful love story and how they started their vineyard with a meager ten acres.  Her mother gave up a rising career as a concert cellist in New York and in turn, her father names his favorite varietal of wine, Concerto, as an ode to her mother’s musical roots.  The word concerto has its roots in two words, which mean to tie and join and also to compete and fight.  Much as the soloist and the orchestra both cooperate and compete in the creation of the musical flow—synchonization.  One doesn’t need to know much about vineyards, as I didn’t, to appreciate the father’s spiritual yet highly successful approach to winemaking.

There are beautiful descriptions of the scenery of the countryside and also of what happens during a harvest week, including the traditional Harvest Party. The tension builds to a startling climax, reminiscent to me of Anne River Siddons’ books. Georgia’s voice also reminded me of the main character’s voice in Rules of Civility by Amor Towles for whatever reason, although the setting could not be more different.  New York City in 1930 vs. wine country California in present day. Throughout the story, we are as torn as Georgia is—will she go through with the wedding or not? It’s a fascinating story of family life and relationships as Georgia searches for answers and solutions, not just for herself, but for her family.   We meet many other colorful characters during this week, all set against this beautiful tapestry of wine country.

This book begs to be read with a glass of wine at your side. And according to this author, did you know it takes 800 grapes to make one bottle of fine wine?  Perhaps that will make you appreciate your next happy hour a little more.