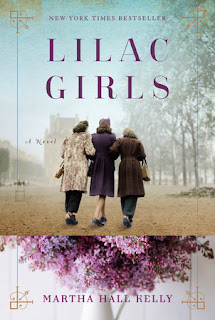 Lilac Girls is historical fiction, where the author Kelly so skillfully combines the lives of two real women with fictional characters to reveal the plight of the Ravensbruk Rabbits.  This was the name given 74 Polish women who survived WWII and the unbelievable cruelty they endured at the only major Nazi concentration camp for women, just outside Furstenbeg, Germany. If you have never heard of the Ravensbruk Rabbits, you are not alone but that is soon to change with the publication of this remarkable story that was five years in the making.

I might add that cruel is not harsh enough a word as these women were subjects of medical experiments that were designed to maim and cripple healthy human beings.
According to the Alliance for Human Research Protection website, “Their legs were broken, pieces of bone extracted, nerves and muscles torn. To simulate battle injuries, the doctors sought to maximize infection by deliberately infecting the wounds using increasingly more potent bacteria cultures, rubbing the surgical wounds with bacteria, sawdust , rusty nails and slivers of glass.” Yes, unimaginable but true.   At this point in the story, I almost did not continue because it was so disturbingly graphic, but I continued and glad that I did as history turns this unspeakable event into a triumph of the human spirit and the goodness of one remarkable woman in history—Caroline Ferriday.

The genesis of this story, as horrendous as it is at times, begins in a beautiful setting. Ms. Kelly, the author, toured the actual Bellamy- Ferriday house and gardens in Bethlehem, Connecticut, when an article entitled Caroline’s Incredible Gardens appeared in Victoria Magazine in 1999. Ms Kelly was attracted to the home and especially the lilac gardens but it took her several years to finally visit.  She carried the article with her for many years, a bucket list of sorts.  Although she lived nearby, she was busy with a young family, but finally in 2003, she did visit the historic home sitting on 100 beautiful acres.

The home originated with Bellamy, a reverend who gained fame through his role in the Great Awakening, America’s religious revival of the mid-18th century.  One hundred and fifty years later it was purchased by Manhattan socialites Henry and Eliza Ferriday, who with their daughter Caroline created an impressive garden filled with antique roses and specimen lilacs.

Caroline Ferriday is one of three main characters in this novel that is told from three points of view. The other main character is Kasia, a Polish teenager who starts working for the underground resistance movement as Germany begins its invasion of Poland.  As a Polish Girl scout she and many others, in their attempts to defeat Hitler, are arrested and become political prisoners. Kasia, although fictional, is based on one of the Ravensbruck rabbits (or lapins as they were called in Polish, because the unimaginable experiments caused them to hop rather than walk after the experiments).  The third main character is Herta Oberhauser, a German doctor who accepts a job at Ravensbruck.  Herta , like Caroline, is a real life character.

The three lives, Caroline, Kasia, and Herta,  come together when Caroline hears of the survivors’ plight many years after the war. She uses her social connections to bring many of the women to America where they received much-needed medical attention and were treated to a host of restorative measures.    She convinces Normal Mailer, then editor of the Saturday Evening Post to feature their story, appealing to the generosity and sympathy of the American people to help these ravaged women.

If you Google Herta Oberhauser, you can see the role she played in history as the only female doctor at Ravensbruck and the only female at the Nuremburg trials.  For her involvement in the horrendous experiments she was sentenced to twenty years in prison but was quietly released after five years and resumed her medical practice in Germany as a family physician. When Caroline Ferriday heard of this, she worked relentlessly to have Herta’s license revoked and was successful in that endeavor in 1960.

As amazing as this novel is, the author’s journey in the researching and the writing of it is also as fascinating a story.   As mentioned above, Ms. Kelly visited the historic home  and although it was the lilac garden that drew her in, she discovered so much more.  She learned of a remarkable woman in history. Caroline was a Broadway actress, a debutante, and a philanthropist, but what captured Ms. Kelly’s imagination was the black and white photograph of a group of Polish women on Caroline’s desk.  As the guide told her, “Caroline took up their cause. She dedicated her life to these women to assure that their story was not forgotten.”

Ms. Kelly began her research and writing several years later. She studied Caroline’s archives in Connecticut, Paris and Washington, D.C.  As part of her research she and her 17-year old son took a trip to Poland and Germany. They rode the train from the village of Lublin where the girls were put on a train to Farstenberg, Germany to help bring the story to life—to see it through their eyes.

She tells us on her blog that the lilac seedling is now a full-grown bush. It took her that long to write it.  And like the seedling, her story has grown into something beautiful to share with the world.

Throughout the rest of her life, Caroline maintained a relationship with the women she gave new life to. Having never married with a family of her own, she referred to them as her daughters and they called her Godmother.  Caroline is proof indeed that true-to-life fairy godmothers do exist.  A story that will in some ways break your heart and in others confirm the goodness of people and the resilience of the human spirit.